The stream, known as the Kirkebrok (Church Brook) these days just appears out of a pipe. An 1849 map shows two sources, one in the area of the St Helens Road and Deane Church Lane junction which is culverted as it reaches Wigan Road - and one close to New York which disappears near Smithy Brow, so it is possible they join up underground and emerge in Deane Clough. A later map shows the Daubhill stream flowing into the lodge at Dove Mill and flowing out again at the NW corner. It is also thought to travel under Kirkebrock Road and under a grating to the side/rear of the Co-operative store near Hulton Lane.

Once the Kirkebrok passes down the Clough, it joins the Middlebrook. More about the course of the Middlebrook can be found at www.boltonwebeden.co.uk/croal. 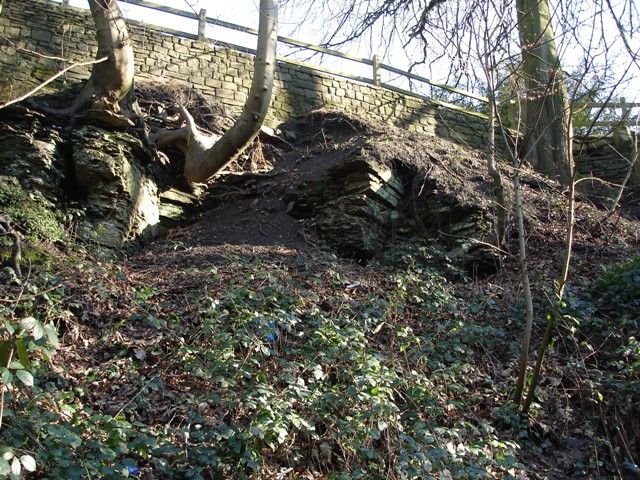 There is a piece of folklore which says the cave in the Clough wall goes all the way to the Town Hall. In fact, it only goes a few yards. It was bricked up many years ago for safety reasons.

Discovered while looking through archives at Bolton Museum is this reference. 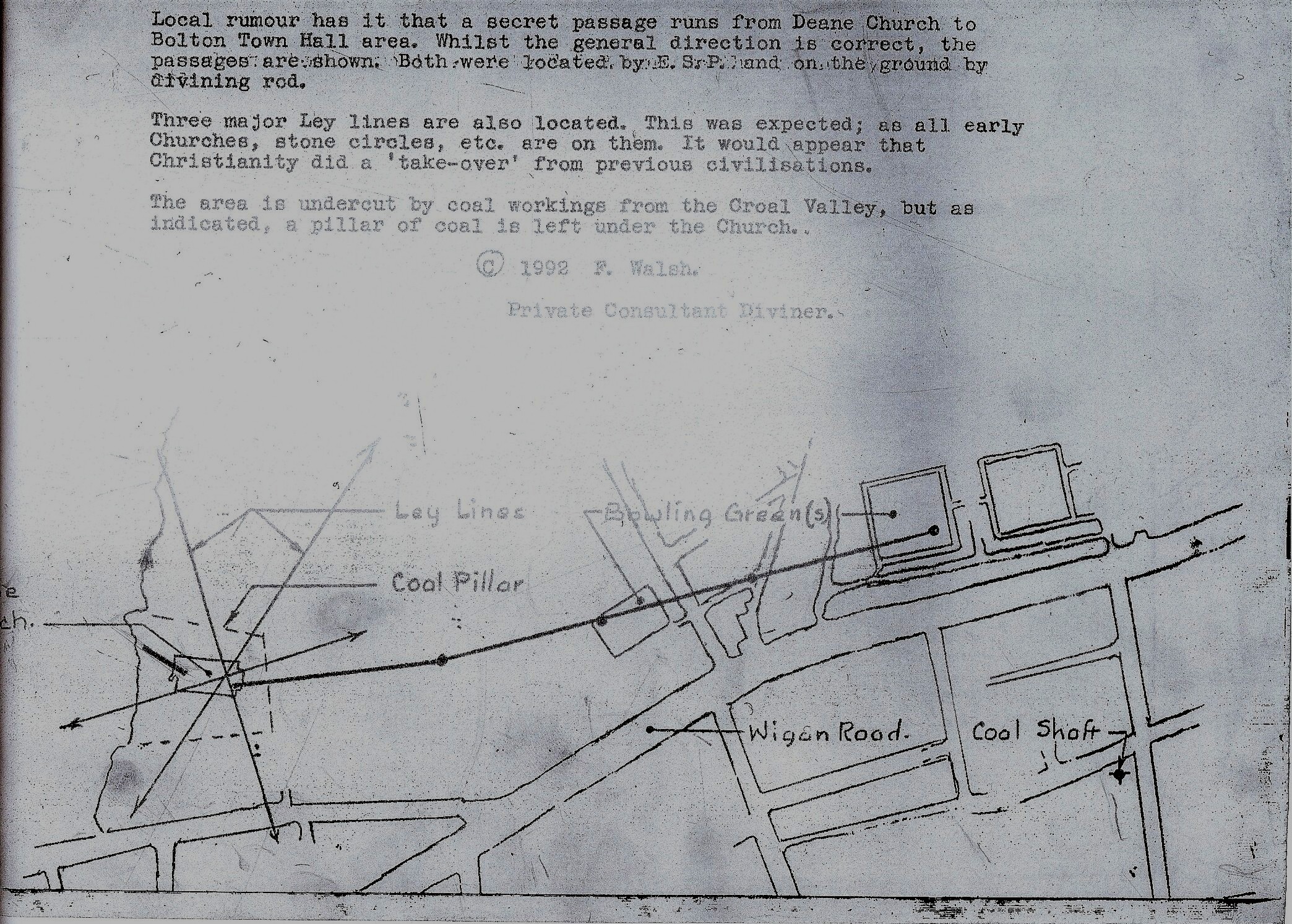 The text on the above image:
Local rumour has it that a secret passage runs from Deane Church to Bolton Town Hall area. Whilst the general direction is correct, the passages are shown. Both were located by E.S.P. and on the ground by divining rod. Three major Ley lines are also located. This was expected; as all early Churches, stone circles, etc. are on them. It would appear that Christianity did a 'take-over' from previous civilisations. The area is undercut by coal workings from the Croal Valley, but as indicated, a pillar of coal is left under the Church. © 1992 F. Walsh Private Consultant Diviner"

The author of the above document openly admits it is a rumour. He/She goes on to explain that methods used to locate the mythical tunnel included Extra Sensory Perception (ESP) and divining rods. There is no actual proof. The Church of England, and indeed the Roman Catholic Church, would not support the theory that Christians would use occult methods to construct such a marvel of engineering. Back in 1452 when the current church building was erected, there was no Town Hall on the present site in Victoria Square (officially opened 5 June 1873). Little Bolton Town Hall is also a relatively modern structure built in 1826.

If we look back in history, it was the Roman Catholics that built the original church. The Church of England did not exist before Henry VIII (1491-1547) created the 'Established' Church. The persecuted priests of that era would not have needed an escape route of several miles in length. If, and this is a very big IF, a priest had been in the church when the enforcing officers came looking for them, the sensible escape would have been a priest hole to hide in.

Looking at the practicalities of tunneling, the ground surrounding the church is sodden with water. The soil is heavily clay-based. Documented history shows that many attempts have been made to drain the land which continues to this day.

What, therefore, would be the purpose of the tunnel? No purpose, no tunnel.

More pictures of the Clough here.