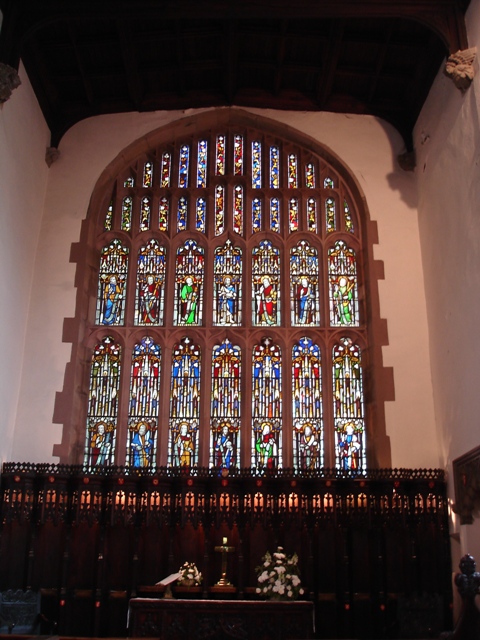 This beautiful window was executed by William Warrington of London in 1845 (in Vicar Girdlestone's time). It is 11ft wide by 14ft 6ins high and contains 14 figures in two rows of seven.

It is a seven light pointed window with Perpendicular tracery in the head, portraying Christ and the Apostles, including St.Paul. The window, is reputed to be one of the best imitations of ancient stained glass in the country. Rev.E.Girdlestone appealed for stained-glass to be put in the east window as "an ornament to our venerable and ancient church and as a personal kindness towards myself." William Hulton, Esq., in an eloquent speech denounced this as a return to the idolatrous days before the "glorious Reformation." He said: "In the house of God, everything ought - according to the Apostle's injunction - to be done decently and in order, but it does not appear to me that stained glass at more than £260 is requisite for these qualifications of a Protestant place of worship in a country village." Fortunately, his pleading did not prevail, and in 1845 stained-glass was put in.

Jesus is portrayed in the centre of the lower row with 3 Apostles on either side; 6 other Apostles are in the upper row, together with St. John, the Baptist.

"The East window (of Deane Church), which is of great size, has been embellished with figures of our twelve apostles, in richly stained glass executed by William Warrington of London, and this imitation of ancient stained glass is said to be one of the best yet produced in the country".

"The eastern, or altar end, window is enclosed by a horseshoe arch of large span. The stained glass is splendid, being filled in compartments with 14 evangelical figures, in flowing robes, exquisitely coloured; and niche-cuspated, fret and foliated work adorn the whole. The tracery consists of seven lights each in the three transoms, all grouped and mullioned."

The figures in the upper row, from left to right are:

It appears that Mr. Warrington, the artist, has left out St. Jude (the companion of St. Simon on many missionary journeys) and put in St. Paul to make up twelve apostles, and with ST. JOHN, the Baptist, and our LORD Jesus, the 14 figures in the window.

To appreciate the full beauty of the window it should be viewed when the morning sun is shining. Then the gold of the chalice, the greens, blues and reds of the robes, and the many colours of the niches and small lancets rejoice the heart.

Over the years there has been adverse comments about the Reredos (erected in 1886, in memory of Bishop Fraser, Lord Bishop of Manchester 1870-1885), obscuring the feet of the figures in the lower row. To determine if something could be done about this, Canon K.M.Bishop approached Manchester University in 1959. The conclusion was not to alter it.